1. LME prices dropped late in the session and failed once again to consolidate above the $1,850 per mton resistance threshold.

LME 3M aluminum prices closed the session at $1,848 per mton, down 0.3% or $6 per mton from yesterday. Prices had risen to a two-month intraday high of $1,866 per mton, increasing along with the base metals complex on growing confidence about an interest rate cut by the Fed, but plummeted to as low as $1,845 per mton during the final minutes of trading as technical selling intensified (end-of-week profit-taking). For a second- consecutive week, prices failed to sustain gains above the $1,850 per mton.

Some early Q4 contract negotiations have started, and early indications still point to lower premiums ahead; with the high end of confirmed Q4 premiums offered so far falling below $380 per mton as an oversupply market seems to be causing the premium differences between Tier 1, Tier 2, and Tier 3 suppliers to progressively diminish. Downside premium pressure seems to now be impacting more the high end of Q4 contract billet premiums, which hovered around $410–$430 per mton (varying by country) in Q3 and now appears to be plummeting below $380 per mton while the fight for market share intensifies amid an oversupplied regional market that is suffering from a cyclical extrusion demand contraction.

The LME Cash–3M contango widened today to $24.25 per mton from $18.25 per mton as the front-end of the curve steepened through October: the Cash–August contango widened to $10.50 from $8.00 per mton, the August–September contango eased to $9.00 from $7.50 per mton, and the September–October contango loosened to $5.50 from $3.75 per mton. LME aluminum inventories increased by 47 kmton this week amid gross inflows of 82 kmton in Asia (Malaysia and Singapore). Meanwhile, the concentration of live inventory holdings eased slightly.

SHFE two-month aluminum prices closed the overnight session up 0.5% at a one-month high of 13,925 yuan per mton ($1,791 per mton, excluding VAT) but reversed gains in after- hours trading after strong resistance emerged when prices neared 14,000 yuan per mton. Prices initially increased in tandem with the base metals complex amid short-term technical buying, which eventually reversed as selling pressure was unleashed at the 200-day moving average threshold (around 13,950 yuan per mton). SHFE aluminum prices remain in technical bearish mode. 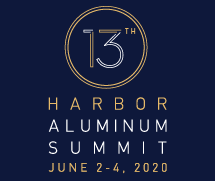